Home > News > What is a DP transmitter?

What is a DP transmitter?

Differential pressure (DP) transmitter is a typical self-balancing detection instrument, which uses the working principle of negative feedback to overcome the influence of unfavorable factors such as component materials and processing technology. The differential pressure transmitter is used to measure the liquid level, density, and pressure of liquid, gas, and steam, and then convert it into a 4-20mA DC current signal output.

How does the DP transmitter work?

The result measured by the differential pressure transmitter is the pressure difference, that is, △P=ρg△h. Since the oil tank is often cylindrical, the area S of its cross-sectional circle is constant, then gravity G=△P·S=ρg△h·S, S is constant, and G is proportional to △P. That is, as long as the △P value is accurately detected, which is proportional to the height △h, when the temperature changes, although the volume of the oil product expands or shrinks, and the actual liquid level rises or falls, the detected pressure will always remain unchanged. If the user needs to display the actual liquid level, it can also be solved by introducing medium temperature compensation. 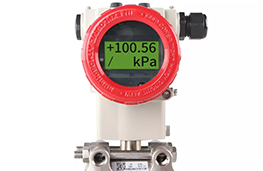 Differential pressure transmitters are suitable for the following measurement and control situations:

② Medium that is easy to crystallize.

⑤ It can eliminate the occurrence of the leakage of the pressure guiding tube and pollute the surrounding environment; it can avoid the tedious work of frequently replenishing the spacer fluid due to the instability of the measurement signal when the spacer fluid is used.

⑥ Continuous and accurate measurement of interface and density.

⑦ The remote transmission device can avoid the mixing of different instantaneous media so that the measurement results can truly reflect the actual situation of the process change.

In occasions with high sanitation and cleaning requirements, such as food, beverage, and pharmaceutical industry production, not only the part of the transmitter that contacts the medium is required to meet hygienic standards, but also it should be easy to wash to prevent cross-contamination of different media.

2. Do not touch the diaphragm with hard objects, causing damage to the isolation diaphragm;

3. The measured medium is not allowed to freeze, otherwise, the isolation diaphragm of the sensor element will be damaged, resulting in damage to the transmitter. If necessary, the temperature protection of the transmitter is required to prevent freezing;

5. When measuring steam or other high-temperature media, heat pipes should be used to connect the transmitter and pipes together, and use the pressure on the pipes to transmit to the transformer. When the measured medium is water vapor, an appropriate amount of water should be injected into the cooling pipe to prevent the superheated steam from directly contacting the transmitter and damaging the sensor;

6. In the process of pressure transmission, the following points should be paid attention to,

a. Do not leak air at the connection between the transmitter and the cooling pipe;

c. The pipeline must be kept unblocked, and the sediment in the pipeline will pop up and damage the sensor diaphragm;